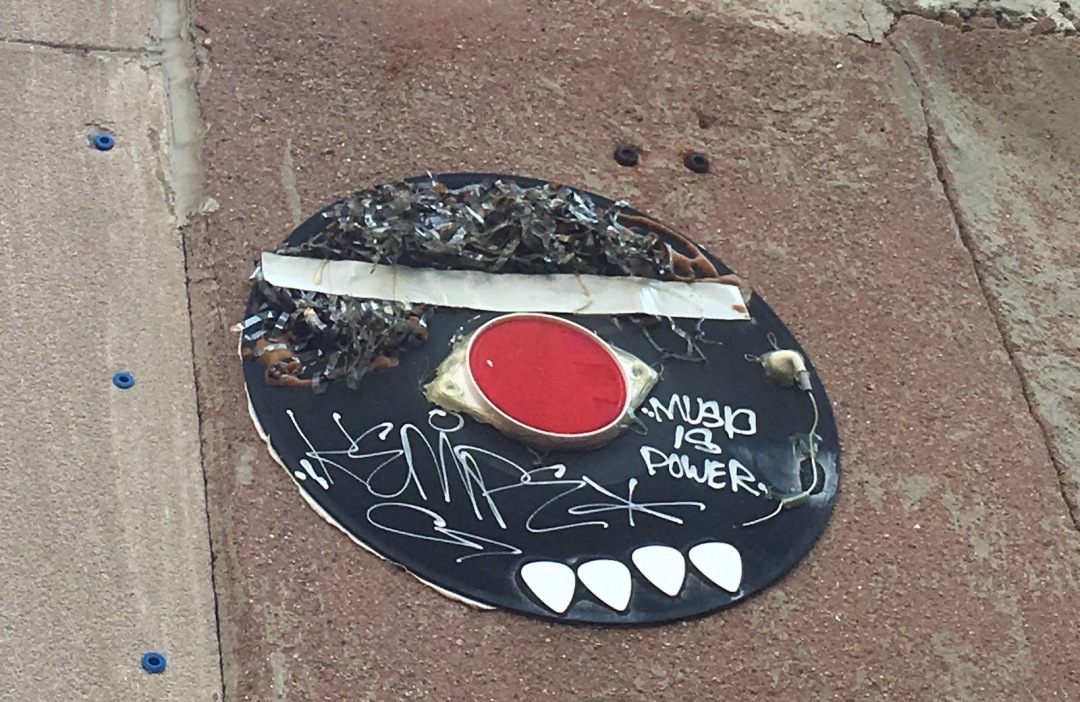 Recordface Still Lives in Indianapolis, He’s Just Not Around As Much

He mysteriously appeared around Indianapolis a few years ago. He has angered some in the Broad Ripple neighborhood. He is Recordface and he is still hanging around the city.

The Indianapolis Star reported on the “mysterious art installation” in October of 2017. A rouge artist created faces around the Indianapolis area using a variety of elements connected to music – guitar picks, cassettes, earbuds and even an iPod.

The base of each Recordface is a vinyl record.

According to the Indianapolis Star, at least 50 Recordfaces were installed around Indianapolis sometime before February 2017.

But what some may see as an attempt to add to city’s public art, others consider it more of an eyesore.

The newspaper reported later in 2017 that at least one of the Recordfaces had been placed over an existing mural created on a traffic control box at Broad Ripple and Guilford avenues. That version of Recordface has since been removed.

There are still a handful of Recordfaces living throughout Indianapolis. Although, not all of them have been placed in as obvious areas as the one that formerly lived on the traffic control box.

This Recordface has seen better days but was still hanging out earlier this year on the side of a parking garage at Market and Talbott streets, just east of Monument Circle. It sits just under a sign advertising Enterprise Rent-A-Car.

The front of the album reads “music is power” and features cassette tape hair, guitar pick teeth and a red reflector in the center.

Recordface might not immediately jump out as being representative of a face if you are casually passing by. It could easily be confused for a pile of random trash nailed to the side of a wall if you don’t take a moment to examine it.